How long have you worked for League City?

I started as a code compliance officer 10 years ago and was promoted to manager about a year ago. Before that, I worked as a bailiff with the City of Houston’s Municipal Court System.

You used to be a sheriff’s deputy. What made you switch careers?

I served with the Jefferson County Sheriff’s Department in Beaumont, Texas for 17 years before I moved to Houston. While I enjoyed the job, it was time to try something new, so I applied to be a code compliance officer for League City.

What does a code compliance officer do?

I like to think we are responsible for ensuring that the City always looks “pretty”. We make sure there is no blight such as graffiti, high-grass and weeds, abandoned vehicles, and dilapidated structures. These things can bring down property values and are unsightly.

What is your favorite part of the job?

My co-workers. They are great people.

When you are not working for the City, you are a college football referee. How did that come about?

What is the best and worst part of being a college referee?

I genuinely love the game and I love being on the field with the coaches and players. The worst part is when I make a call the fans don’t agree with and I get booed. I am pretty used to that though.

Which coach and or player have you enjoyed meeting the most?

I would say Mac Brown when he coached for the University of Texas. As far as players, there was a photograph of me taken by a sports photographer at a University of Oklahoma game where I am standing next to quarterback Baker Mayfield, who was the number one pick in the recent 2018 NFL Draft. I liked the photo so much, and Mr. Mayfield, that I had a painting of it created. 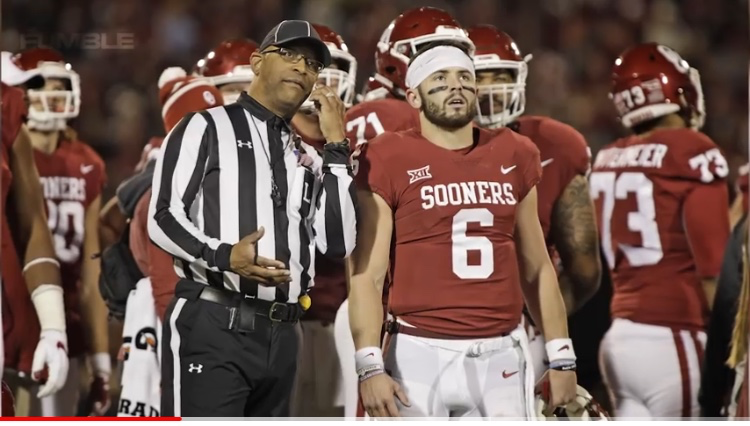